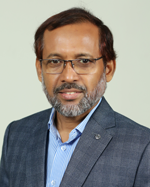 Education:
Mr. Hoque obtained his undergraduate and graduate degrees in Accounting from the University of Dhaka. Additionally, he attained a Master’s degree in Management Information Systems from the City University of New York, USA. He has also completed a Certificate course on International Audit from Nanjing Audit University, China.

Md. Mahbubul Hoque joined the office as the Deputy Comptroller and Auditor General (Senior) on 14th February 2021. He was appointed in the Bangladesh Civil Service (Audit and Accounts) in 1991 and has since held various positions in the Government.

Md. Mahbubul Hoque was born on 1st December 1963 in Feni, Bangladesh. His wife, Mrs. Nahid Sultana, is the Country Director of Zakat Foundation of America, Bangladesh. Together, they have two sons and a daughter.